This author has not yet filled in any details.
So far Southern Tasmanian Waste Management Group has created 4 blog entries.

Around 300 million tampons and 500 million pads are sold in Australia each year. The Sustainable Period Project estimates that with every period where only disposable pads and tampons are used, Australians spend up to $20 and throw away one shopping bag full of plastics, fibres and packaging.

And with the average woman using over 10,000 disposable menstrual products in their lifetime, that’s a lot of waste going to landfill.

For women and girls looking to reduce their period product waste, there are several alternatives available including washable cloth pads, period underpants, and menstrual cups.
Although the up-front cost is higher for re-usable products, they provide better value in the long run.

The Tasmanian Government is introducing a Container Refund Scheme (CRS) as part of its Waste Action Plan. The aim is to start the CRS sometime in 2022.

You can find out more about Tasmania’s CRS plans and next steps on the Tasmanian Government’s website.

The Government recently announced its position on how Tasmania’s CRS should be governed. The selected model is ‘split responsibility’ governance. That means a Scheme Coordinator oversees the Scheme’s finances and administration, while an independent Network Operator establishes and runs the network of Container Refund Points.

The Local Government Association of Tasmania (LGAT) supports this model. Here’s a statement from LGAT made on 4 February 2021:

The President of the Tasmanian Local Government Association Mayor Christina Holmdahl said:
“As the main provider of rubbish removal and recycling for Tasmanian communities, councils know a Container Refund Scheme will both reduce the burden of plastic litter in our environment and increase recycling rates, for the benefit of our whole community.”

LGAT commends the State Government on choosing a split-governance model for Tasmania’s Container Refund Scheme, which separates responsibility for running the scheme from operating the container collection network, similar to the model currently operating in NSW. Under this model, the network operator is motivated to capture as many containers as possible, which is a win for the community and the environment.

“A split-governance model is likely to result in many more accessible collection points than the alternative model, making it easy for community members to return their containers and receive their refund” Mayor Holmdahl said.

“By separating running the scheme from the network the State Government can guarantee consumer convenience and therefore high rates of container return. The more containers returned means a lower cost scheme for the community and better environmental outcomes” Mayor Holmdahl continued.

LGAT looks forward to continuing to work with the State Government on improving waste management and seeing the benefits for all Tasmanians and our local environment.”

E-waste (short for electronic-waste) is electrical equipment that no longer works and can’t be repaired. It Includes computers, printers, mobile phones, TVs, monitors and electrical accessories like keyboards, power supplies and cables.

Some e-waste products are recycled under Product Stewardship Schemes, this means that when you buy these products a portion of their price is used to pay for the collection and recycling of them once they no longer work. In Australia, this includes entertainment equipment, mobile phones, computers and printers.

Not all e-waste collection and recycling is covered by a Product Stewardship Scheme so small fees are sometimes necessary when the items are returned for recycling to help with the cost of dismantling these valuable resources.

NOTE!  E-waste recycling services vary around Tasmania.
> > Check with your local council to see what can be recycled in your area.
> > Electrical-goods retailers (such as Officeworks) also sometimes collect e-waste recycling.

Here’s a general guide to the e-waste items most commonly accepted for recycling in Tasmania :

Special collections may also exist for:

You can post your e-waste for responsible recycling for a flat fee of $14.95 thanks to a partnership between TechCollect and Australia Post known as TechExpress. 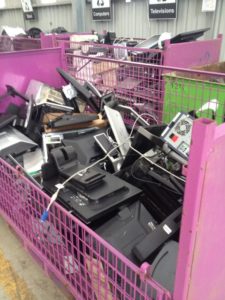 Can it be repaired?

Fixing damaged electronic items can save money and conserve resources. Manufacturers may offer repair services, especially if still under warranty. There are also Repair Cafes and licensed technicians who can service and repair a wide range of electronic products.

See what’s possible, you can always turn to recycling as a last resort if repairs cannot be made and re-use if no longer an option.

Read more about e-waste in our fact sheet:

Thanks for rethinking waste in Tasmania!

Home composting in Hobart and across Tasmania

Want to turn your food and garden waste into nutrient rich compost to improve your soil?

This fabulous guide from City of Hobart and Good Life Permaculture was written for Tasmanians living in cool temperate climates and covers:

A guide to home composting 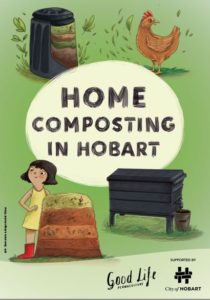 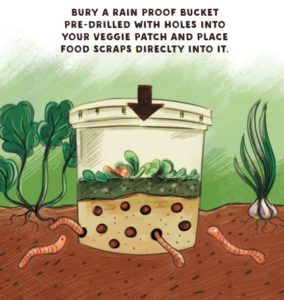